Italy’s Elisa Rolle had an idea. On her own, she transformed that idea into what is now the fifth edition of an international and highly respected writing competition called The Rainbow Awards. Designed to celebrate and honor the best stories featuring LGBT (lesbian, gay, bisexual, transgender) characters, fiction and non-fiction, the Rainbow Awards has quickly gained global recognition. Hundreds of entries are judged by an international, volunteer, panel of judges consisting of all walks of life. I’ve been honored to be a judge for the past two contests.


Due to the competition’s steady growth, this year Elisa accepted help from the Rainbow Romance Writers group, a chapter of the Romance Writers of America organization. Still, the Rainbow Awards maintains its original concept of being open to any and all writers who wish to enter their LGBT stories. The author’s sexuality is irrelevant – the competition is about the story, about superb storytelling, and the entries thus far have held true to Elisa’s dream.


Writers still have an opportunity to submit their work for consideration as this year’s contest closes August 31st, 2013. Finalists will be announced after October 15th, and the winner announcements will take place in December, 2013.


The categories range from literary, to historical, to romance, to mystery, to science fiction, and everything in between. Past winners include multi-award-winning and bestselling authors as well as self-published and novice authors. As I said, the Rainbow Awards is about the story, not who wrote it.


For details on how you may enter your story, please go to: http://www.rainbowromancewriters.com/rainbowawards


Q) Elisa, why did you begin this huge undertaking of an international competition?


A) At the time, around 2008, the only LGBT Awards were more mainstream literature, and the genre categories like Romance, Sci-fi, Fantasy, Erotic Romance, Historical Romance were suffering from it, most of the time confined in one only category. Moreover, the ebooks industry was becoming more and more prominent, and those awards didn’t consider them as eligible submissions. The first Rainbow Awards, in 2008/2009 were more a safe haven for those authors and books that couldn’t compete with the big boys. But after only 1 year, the distance shortened, and now we have mainstream authors along with self-published authors, but as you said, it’s the story that counts, not who wrote it.


Q) What has been the most difficult aspect of making, and keeping, the Rainbow Awards a continuing competition open to any and all writers?


A) Finding the judges to read all entries, and trying to adapt the categories to the continuing changes of the market; the past 5 years saw a huge development of the LGBT market, and the Rainbow Awards had to adapt. We still don’t have many submissions in the Non Fiction categories, we are huge in the Fiction one, but still, I want to maintain them, to allow to all authors to find their right space.


Q) Organizing this by yourself, I’m sure there were times you wanted to quit, so, what kept your dream alive?


A) The response from the readership and the good work that the Jury did year after year; the winners of the past years are according to me, among the best authors of LGBT fiction, even when they weren’t the most famous names; the Jury is able to not be influenced by a big name, and they have always awarded the best stories.


Q) Will there come a day when you believe the Rainbow Awards is self-sufficient and you can relax and just enjoy what you founded, and how will you know if that point is reached?


A) I was hoping this was the year, but indeed it was not yet time; the Awards are still very linked to my blog, that is an all-inclusive LGBTQ container; I still think an organization can help give the Rainbow Awards a more official window, maybe next year I can try to step back a little. 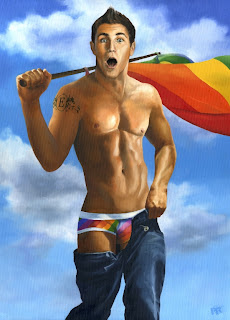