Former librarian Debbie Vaughan, like so many of us, had a dream to write. The difference is, Debbie pursued her dream with the passion she instills into each of her stories, and she now proudly possesses the title of published author.

Raised in rural Arkansas, Debbie recalls how her grandfather's wagon became her royal coach, his plow horse her charger, and the barnyard animals whatever her child's mind could conjure. Most importantly, she learned early her imagination knew no limits. To this day she refuses to place borders on wherever her mind chooses to lead her pen.

But another lesson she learned was to respect life in all its forms. When not at work at her retail job or writing, Debbie rescues animals and nurses those in need back to health. Her current household includes ten dogs. And when the numerous storms and freezing winter hit the Arkansas area she continues to reside in, she made sure the horses were all fed, watered, and out of the weather, while she wasn't. 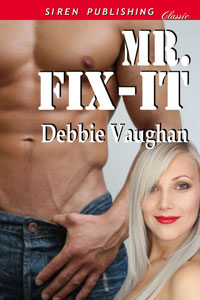 Her second offering, "Mr. Fix-It," is a contemporary romance surrounding a divorced woman - an animal lover (sheer coincidence, I'm sure) with a pack of dachshunds and some horses – in need of help repairing her farmstead. When a widowed repairman arrives, our heroine realizes he might be able to mend her heart as well. And maybe the mattress in the bedroom. But her psychotic ex has other plans, plans that don't include both of them living long enough to enjoy their divorce.

One sure thing readers will always find and enjoy within Debbie's stories is her inborn sense of humor. This vivacious lady simply can't help it. So, if you enjoy romance sprinkled with a laugh and the bedroom door left open, be sure to give a Debbie Vaughan story a look.
Debbie's Web Site

Q) You went through all the trials and tribulations of seeing the rejections come in time and again. What kept you going until you found the right story for the right publisher, in this case Siren Publishing?

A) Well, Dave, some days it was hard. But life IS hard. That’s a lesson I learned at an early age. I’ve had a lot of “No!” thrown at me. My friends helped to be sure. They always had a kind word of encouragement. You should know since you were one of them. But mostly, and I think this is probably the most important thing any writer can do--YOU have to believe in your work. If your characters don’t live and breathe on the page for you, don’t make you laugh and cry-- they won’t for anyone else.

Q) "Dare to Dream" is a bit different in that you include not just the fantasy of time travel, but Native American legend as well. What inspired you to go in that direction?

A) I’ve always been intrigued by Native American lore and by the connection those peoples had with the land and animals. They were so much more grounded in nature than most, and of course they were historically the underdog. I always root for the underdog. But to be honest, I never set out with that goal in mind. My characters define themselves as I write.
Q) Was there a person in your life who you attribute your infectious humor to?

A) Not really. Life often gives you only two choices—to laugh or to cry. I believe the glass is truly half full. There is no future in wallowing in self doubt and pity, which can only make the situation worse. Put on a smile and the next person you meet will smile back. Your day will brighten. There are a lot of clichés clinging to my tongue, all of them true.

In reality, life is what you make of it. So why make yourself and everyone around you miserable? 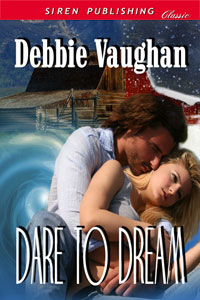 Q) Where do you believe your intense love and appreciation of animals came from?

A) Animals were in my earliest memories. Sharpy, the Pyrenees mix who tended my grandfather’s cattle--and me. I lay on the porch in the sun and sucked my bottle with him as my pillow. He guarded me from the copperheads and rattlesnakes as I ran to meet grandpa coming in from the fields. I lay with him when he died under the gardenia bush. No child ever had a better or more loyal friend.

Nellie, the plow horse who graciously allowed seven of us kids to ride her at once. She froze in mid-stride if one of us so much as titled. The list of names would be long and distinguished, each, in their own way, so I won’t recite them all. Animals give with their whole heart, never holding back fearing to be hurt, they love unconditionally. People would do well to emulate them.

A) I hope you enjoy Dare to Dream and Mr. Fix-it and find them meaningful as well as entertaining. I would love to hear from you. Dave has included my website address, please leave a comment or find me on www.facebook.com/author.debbievaughan or at my publisher, Siren Bookstrand, Inc. http://www.bookstrand.com/debbie-vaughan Hopefully, my Legacy Series will find a home soon as well. My vampires don’t rust, bust, collect dust or sparkle in the sunshine. As a matter of fact, they’re like no vampires you’ve met yet!

And, because I would be remiss not to do so, I must add a message dear to my heart. Every day millions of animals die in shelters and abandoned on the streets. They have done nothing to deserve this fate other than be born. There are not enough homes for the ones now dwelling on this earth and yet we continue to breed or allow breeding. After 25 years in rescue I know the only answer to this problem is sterilization. Please, be a hero and save thousands of lives--spay and neuter your pets! Do not breed or buy while shelter animals die. Adopt! Even if you want a pure bred animal, you can find them in shelters and with breed rescue groups.

I do practice what I preach. Six of my ten dogs are purebreds and both of my horses. All are rescue and all are sterilized.
Posted by David Kentner -- KevaD at 8:49 AM