Now, you know I had to take a look at a book titled “Cats and Daughters: They Don’t Always Come 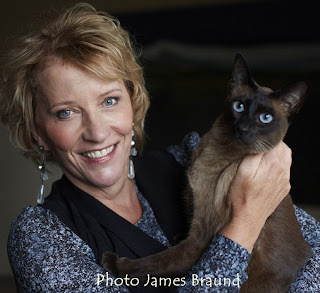 
Helen Brown became an international bestselling author with her memoir “Cleo: The Cat Who Mended a Family.”  Technically, “Cats and Daughters” is the sequel, or follow-up, to that acclaimed book. But, as “Cleo” is a memoir, the sequel is in reality the next chapter in the author’s life. And what an interesting life she’s had.


Breast cancer drove the arrow of mortality awareness into Ms. Brown. While recuperating from surgery and all the accompanying emotional highs and lows, the last thing Ms. Brown wanted was another cat. Of course, that’s exactly what she got; a feisty Siamese ball of attitude called Jonah who turned out to be a healer in a furry disguise…who requires a daily dose of an antipsychotic drug. No joke. Ms. Brown also received the news she had a wedding to help arrange for her son, and that her daughter had decided to become a Buddhist nun in Sri Lanka. Now, please remember that this is a memoir, not a fiction novel. And here I thought forgetting to buy coffee was a bad start to a day.


What is remarkable about Ms. Brown is her ability to see beyond what many of us would view as tragedy and find the joy hidden within whatever life throws at her and her family. Simply put, life and its difficulties aren’t to be mourned, and Ms. Brown is our personal cheerleader. Ms. Brown’s uplifting style of writing fully utilizes her wit and charm to disarm and mesmerize readers.


A resident of Melbourne, Australia, Ms. Brown is an award-winning columnist, journalist, script writer, and TV presenter. Her book “Cleo” is currently being made into a movie.
www.HelenBrown.com 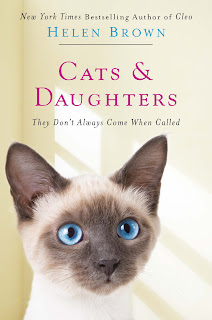 Q) My mother was a breast cancer survivor, so I know the emotional bomb that diagnosis brings with it. Of course I have to ask, how are you doing?


The diagnosis is very frightening but it helps to remember this is one of the most curable cancers.  I remember feeling cynical when people said cancer can bring gifts, but five years down the track and with a good prognosis, I have to say it’s true.


Since the mastectomy, I appreciate life on a different level. I don’t turn down adventures any more. That’s why I’m fostering a cat in New York for a month at present. And I don’t feel guilty saying no to things I don’t want to do.


Before going to sleep at night, I often make a list of 10 things I’m grateful happened during the day. It nearly always doubles, and often trebles.


Q) You suffered the loss of a child. Life hasn’t been easy, and still you fought through the human tendencies of self-pity to write “Cats and Daughters.” How did you manage to make this book the joy it is and avoid the pitfall of melancholy?


A) Resilience is an underestimated quality.


I don’t think it’s helpful to expect life to be easy or happy. That just leads to disappointment, and an inability to deal with tough times when they happen.  A sense of entitlement gets you nowhere. Life can be hard at times and we all end up in the same place.  Sometimes you just have to roll with it, be kind to others when you can - and find laughter in the shadows.


Q) In an interview you mentioned how for a time after the death of your son you were envious of people who you believed had an easier life than you. How has your outlook changed since hearing from so many people inspired by your stories?


A) I have a theory that anyone who loses a child is insane for at least a year. I certainly experienced powerful anger and resentment, but it didn’t take long to realize I wasn’t the only person on earth who was suffering.


Everyone has to deal with loss sooner or later. Once the anguish softens – and it does eventually – you’re in a good position to understand and help others. I’ve tried to do it with my books, and I’m honored to receive emails from people in the raw stages of grief. I hope my replies are helpful.


Q) You are a multi published author, though your earlier books are for the most part a collection of articles from your column. “Cleo” and “Cats and Daughters” could be viewed as a collection of stories from your life. Naturally, this leads to the question of what’s next? You’re a marvelous writer and we’ll be looking forward to whatever your next project is.


A) After writing about real life for many years, I’ve started work on two books of fiction. They’re both quirky stories with dollops of romance and, I hope, soul.


I’m relishing the freedom of not having to run every chapter past my family. My poor husband and kids have been very tolerant being the focus of my writing for so long. They deserve a break.


Q) We touched on this earlier, but I’ll pointedly ask it now; “Cleo” was a book I believe was part of 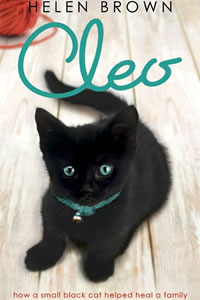 your own healing process. Your story turned out to be a source of healing for others. With that knowledge comes a degree of responsibility, be it genuine or expected. How has that altered the way you approach writing?


A) I wrote Cleo hoping it might sell a few thousand copies to my fans in New Zealand. When it sold half a million copies around the world and was translated into more than 16 languages I was astonished. It taught me people are very much the same. Whether they live in Indonesia or Arkansas, there’s nothing they wouldn’t do for their kids or pets. It’s a shame we tend to concentrate on the differences. As a result I haven’t changed my writing style. I’ve always written from the heart.


Q) Any parting thoughts for your fans and those new to your work?


A) Thank you for finding me. I hope this is the beginning of a lifelong friendship.
DA Kentner is an award-winning author www.kevad.net