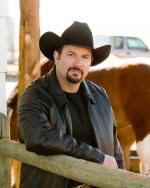 Award-winning author C. J. Box is the author of eleven novels including the Joe Pickett series. He’s also won the Anthony Award, Prix Calibre 38 (France), the Macavity Award, the Gumshoe Award, and the Barry Award. BLUE HEAVEN, Box's first stand-alone novel, won an Edgar Award for Best Novel of 2008 and has been optioned for film. THREE WEEKS TO SAY GOODBYE, was published in January of 2009 and debuted on the NY Times extended bestseller list. BELOW ZERO, Box's ninth Joe Pickett novel, was published in June of 2009 and has become the biggest bestseller to date.


And this international fame allows him to do what he loves best… fish, ride horses, and spend time with his wife and three daughters.

A world traveler at home in the mountains, I met Mr. Box in Muskego, Wisconsin, where he had sojourned to do that which most of us think an internationally renowned figure wouldn’t do. He was there to meet and shake the hands of his fans.

C.J. is a gentleman and one of the nicest people any of us could ever hope to meet.
http://www.cjbox.net/

A) In high school, I was reading Joseph Heller's Catch-22 at the same time I saw a movie at the drive-in theater in Casper, Wyoming with a screenplay by Thomas McGuane. The combination of these things made me think for the first time that maybe I could do this.

Q) You are in reality a very quiet and reserved man whose love of the outdoors is second to none. Yet you make yourself available across the country to your fans. How do you balance that part of you that relishes the solitude of fly-fishing and the open spaces of Wyoming with the demands of public appearances?

A) Trout rivers and streams ice up over the winter in the Rocky Mountains, and there is no fishing -- or anything else except skiing -- to be had. That's a good time to get out and about and meet readers, which I love to do.

Q) Your latest release, NOWHERE TO RUN, which once again has garnered you a much-deserved place on the NY Times Best Seller list, is the tenth Joe Pickett novel. What is it about this character that inspires such marvelous tales of mystery and suspense within you?

A) I always start with an issue or controversy: from eco-terrorism to hunting ethics to global warming to (in the current book) the encroachment of a growing government on citizens. When I've researched the issue I figure out how to build a plot that will, in effect, pull the reader through that concern in an interesting, page-turning way.

Q) This question is a bit contrite, but I have to ask it to satisfy my own curiosity. Your books have been translated into twenty-four languages. How does it feel to know you have works out there that you wrote, but can’t read? Also, did you have to make changes to any of your books in order to be published in certain countries?

A) It is strange to hold editions of my books published in Japanese, Chinese, Russian, Bulgarian ... and hope the translator I've never had any contact with has translated the work well. No, I've never made any changes in the manuscripts to adapt to overseas markets.

A) Read! Read widely and deeply and don't confine yourself to a genre. Figure out what it is when you read your favorite writers that grabs you. Break it down and study it. Then write the book.
Posted by David Kentner -- KevaD at 9:07 AM