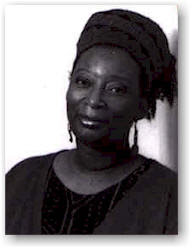 Twenty years. Two decades. What did you do with your last twenty years?

Sandra Jackson-Opoku used hers to write one of the most stirring accounts ever written recounting the plight of African women and their abduction from their homes to the "New World."

I sincerely thank her for taking the time to answer some questions for me. Ms Jackson-Opoku is a woman of dignity and grace and it was my honor to have shared a moment in time with her.

A) I seem to trace that impetus back as far as my pre-reading days, around the age of four. Mine was among the first African Americans to integrate a public housing complex called Trumbull Park. One of our neighbors was a steelworker and writer, Frank London Brown who wrote a novel about the experience, appropriately titled Trumbull Park. I recall being inspired by that an ordinary person, someone who lived nearby could write a book and have it published.

I was also inspired by my father, Roscoe Jackson Sr., who wasn't a writer, but a great storyteller. He told these colorful (sometimes off-color) stories about people like Shine and Joe the Grinder. I didn't know it at the time, but these were bawdy figures from African American folklore. I thought Daddy was making it all up!

The character of John the Baptist Wright from my second novel, Hot Johnny and the Women Who Loved Him was modeled somewhat on Jody, AKA Joe the Grinder, who was a legendary lover and ladies' man.

Q) Your debut novel THE RIVER WHERE BLOOD IS BORN won the Black Caucus of the American Library Association Award for Fiction. While a motivating and dramatic epic of a family of women spanning three hundred years and the water that ties each generation to the previous, it is the story of its telling that I personally find intriguing. That story spans two decades. For this novel to become reality, it took an inextinguishable flame deep within you. Please share with us what fuelled your soul to place a beating heart within this book.

A) The novel's origins were very different than what it eventually became. It began after my first trip to Africa in my early twenties. I spent a year in Lagos, Nigeria as an exchange student and got to travel around the country and other destinations in West Africa. My main interest in writing in those days was journalism and poetry. When I returned I started doing travel writing, and thought I'd do some pieces on my experiences in Africa. Those pieces started morphing into short fiction about black women travelers. One of those stories was published in a feminist journal called Heresies, and went on to win the CCLM/General Electric Award for Younger Writers in 1983. I eventually was able to acquire a literary agent and a book deal.

Cheryl Woodruff, my new editor at Ballantine/One World encouraged me to develop what was then a collection of themed short stories into a novel. My challenge then was to figure out a connection between these characters from different places and times. I discovered that they were a family, all descended from the same woman who'd been born in 18th century West Africa, captured into slavery, and transplanted to the Americas. I also had to find some kind of "connective tissue" to stitch these fragments into a whole cloth. That became a storytelling frame between two otherworldly narrators -- the Gatekeeper of the Great Beyond, and Ananse, the storytelling spider from African and Diasporan folklore.

Q) Your duties as an educator keep you extremely busy. Your writing weaves ‘real life’ into a tapestry – one that we long to enjoy with an artist’s eye. Can we look forward to another novel from you?

A) I recently took a year off to write and to roam. I gave up my apartment and stayed in various artists' communities throughout the country, where I worked on three novels. I'm still doing some polishing on them. I can't yet say when will they appear. Hopefully soon.

A) That's a poignant question. With the current economic crisis and the changes in the publishing industry, it is a challenging time for writers right now. All I can say is "be encouraged," and stay the course. When the dust settles, I suspect there will be even more opportunities for writers to become published. It may go without saying, but "don't be quick to quit your day job." There are certainly exceptions, but few writers are able to support themselves fully from their writing. Most of us have to do other things.
Posted by David Kentner -- KevaD at 10:56 PM