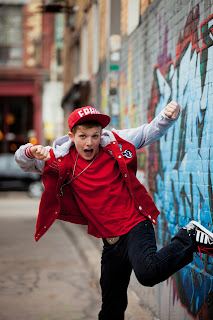 Jake Zeldin stutters. Unfortunately, some people view “different” as weakness, and Jake became a target for bullies. Sadly, the bullying wasn’t limited to his peer group. Teachers reportedly joined in with comments such as “I don't know what is more annoying, that voice or your stutter.” That was two years ago, and Jake Zeldin now stands on the brink of international fame.


Jake discovered rap and a freedom not just of his mind, but from his stutter as well. When Jake picks up a microphone, he transforms to Lil JaXe, a talented rapper who has garnered the attention of the music industry and fans alike. Lil JaXe is set to headline the the Canadian Urban Music Conference Sept. 22nd (http://canadianurbanmusicconference.com/). He is also performing at Free the Children’s WE day (http://www.weday.com). His mission? To show others who have been bullied they are not alone.


With over 1.5 million views of his YouTube video, Jake has also been featured alongside rappers Mos Def and Talib Kweli on Pacha’s Pajamas, a children’s hip-hop album about the environment released in July. This amazing young man is definitely someone to keep an eye on as he performs across the U.S. helping organizations combatting bullying and other concerns that affect us all.
www.LilJaXe.com


I’m stepping aside now to allow my grandsons Kyle and Brennan Kentner to ask the questions.


Q) How scared were you the first time you got up on stage?


Q) Do you still attend the same school where you were bullied by your teachers, or are you now privately tutored or home schooled?


A) The first time I was bullied by a teacher was in Grade six. I no longer go to that school but I visit sometimes and I like to show him that it was actually him putting me down that actually motivated me to get to this point. I do attend a public school where I was bullied again last year however again every time I get pushed down it makes my drive to succeed stronger and stronger.


Q) Do people treat you differently now that they know you have such a wonderful talent and have become so well-known?


A) People are amazed by my ability and talent and allot of kids think it is cool that I meet tons of celebrities and get to hang out and rap for them. I still get teased sometimes by people who don't believe.


Q) Are you a free-style rapper, or do you write your own raps?


A) I do both. I love to free style and think of things on the spot and it allows me to communicate easily and say things that I want to say without any problems. I also love to free style because it really shocks people to hear the difference from my normal talking.
I have been writing my own songs now for three years. I get my inspiration from things that happen around me and things that I go through. I have written five songs now and I hope to continue.


Q) How old were you when you figured out rapping was the easiest way of communicating?


A) I went to summer camp when I was 10, and was asked to join a rap battle.
They gave me a word and I was to create a rap around it. I could not believe that I was ever able to do that without stuttering. From that time on, I never stopped and I never want to stop!


Q) Do you plan on staying solo, or do you have a goal to merge your talents with other rappers and form a rap band (such as the Wu-Tang Clan or the more "old school" Run DMC)?


My goal is to be solo and to continue to rap and write incredible inspirational songs and to do features for other artists.

Q) Do you only use rap to entertain, or do you ever "rap" to communicate with friends and family? (i.e. Just normal dinner conversation)


A) I mainly use rap to entertain. I wish it was that easy to incorporate it with my every day speaking but it is hard to always find things that rhyme. I did recently incorporate the rap into my presentations in school and it is definitely allot easier for me to present in front of large groups when I am rapping.
Kyle and Brennan are the grandsons of author DA Kentner www.kevad.net