Marcus Sakey - The Next Household Name in Crime Drama 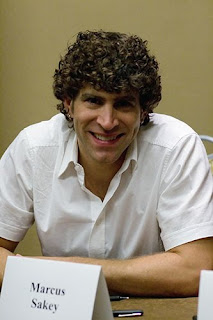 If there is any writer who fits the preconceived mold so many of us seem to erroneously possess about authors, it would be the literary talents of Marcus Sakey.

His debut novel THE BLADE ITSELF was released internationally and the film rights were purchased by award winning actor and producer Ben Affleck.

A fluke? His second and third novels received the same acclaim with the film rights to both being purchased immediately, the third, GOOD PEOPLE, by Toby McGuire’s production company. And his fourth novel, THE AMATEURS, is on the same fast track of ensuring Sakey’s well-deserved position as one of America’s best known authors.

Back at home in Chicago for a brief respite, Marcus was kind enough to take a few minutes to share some thoughts with me.

Q) What was the defining moment or event that sparked the desire to become a published author?

A) Learning to read. I remember the moment, the exact instant when the squiggles became words and I could see Spot run. That was it, I was hooked.

Q) Many authors in the crime/mystery/thriller genre hang their hats, hopes, and careers on one protagonist. You haven’t, though I am aware there have been those suggesting you write a book series. Will there be a series and if so, what type of character will your protagonist be?

A) Hard to say. I certainly wouldn’t rule out the possibility. But right now, I really like coming to each book fresh. I have some overlapping characters—most very minor, although there is one in my upcoming novel that is a pretty big figure—but you still couldn’t really call the books a series.
If I do write a series, I’ll likely follow the model of people like Laura Lippmann and Harlan Coben, where I write one in the series, then a standalone or two, then return to the series.
For me, after I spend a whole year with a group of characters, I’m just not interested in diving into another year with them right away. I wouldn’t bring the energy that I need.

Q) Even though your first three books were snatched up for potential films and your fourth is receiving critical acclaim, you remain one of the truly nice guys. I personally have seen you taking time to speak with fans when you didn’t have to. How do you keep yourself grounded and not let your success get in the way of who your are?

A) Kind of you to say. I guess the thing is, I don’t really think of myself as any sort of big shot. I love talking to fans because we’re talking about books and writing, and those are two of my favorite subjects. Not only that, but it’s an incredible feeling to know that someone out there really dug what I created, that it kept them up past their bedtime, just as so many books have done for me. So it’s not any sort of sacrifice.
And on a general level, I believe you get out of life what you put in. Being an asshole may let you win in the short-term, but it’s a pyrrhic victory.

A) Ass in chair, fingers on keyboard. If you want to be a writer, you need to write. Thinking about it and talking about it are hobbies—if you want to make a living at it, it needs to be a job.
As far as specific, tactical advice, I have a tome on my website (MarcusSakey.com), from how to write a query letter to some of my day-to-day tips on crafting a story and polishing your prose.
Posted by David Kentner -- KevaD at 9:39 AM