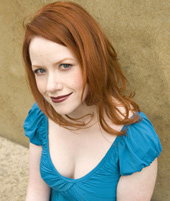 Holding a Bachelor of General Studies, a Master of Comparative Religion, and a Master of Teaching degrees, Kirkland Washington's Richelle Mead left her teaching career when her debut novel "Succubus Blues" was sold, and hasn't looked back. A steamroller of productivity, this demure redhead has seen fourteen urban fantasy novels published since 2007. An astounding pace.


Her latest, "Iron Crowned," the third in the "Dark Swan" series was published February 2011, and "Succubus Revealed" along with a new series entitled "Bloodlines" are due out this coming August. She also penned the "Vampire Academy" young adult series which has been translated into thirty languages, and the "Storm Born" comic book series.
But Richelle refuses to substitute quantity for quality. Her efforts and mastery of the written word have landed her books on the NYT and USA Today bestseller lists.
The lady has skill, class, and style. She's also a Tim Gunn fan and recently stood in a long line for the chance to meet him – while five and a half months pregnant. Now that's a dedicated fan.
Richelle avails herself to readers on Facebook, Twitter, and her blog "Even Redheads Get the Blues."
www.richellemead.com.

Q) Although you’re wrapping up two of your series this year, you have a fourth series debuting this August and just released a Storm Born comic. How do you manage to get so much accomplished in so little time?
A) It’s really all about time management. I think there’s a romantic image about an author’s life, that you can just kind of lounge around and wait for the muse to come. That would be great! The reality is, there are contracts and deadlines, and to make it all work, you have to treat this like a “real” job and put in the hours each day. I always have an eye on when things are due and parcel out my workload to make it manageable. It’s when you let things slide until the last minute that it gets a little crazy!
Q) Speaking of personal life, what do you enjoy doing when you pry yourself away from the keyboard?
A) I wish I could say I had some really cool extreme hobby, but my daily life is pretty tame. I’m content just to hang out with friends and do low-key things, like watch movies. I do like to travel for fun sometimes, but they have to be spaced well away from my book tours. There’s only so much airport time a person can handle!
Q) Succubus and she-demon Georgina Kincaid is your "flagship" character. Where did she first come from, and how did you develop her into a character readers can't seem to get enough of? Also, why do you think Georgina holds such appeal for the readers?
A) I wanted to have a sympathetic paranormal protagonist, and there weren’t (and still aren’t) too many stories about succubi out there. I also wanted there to be a love story at the core of this series, and a succubus’s life provides a lot of drama and obstacles for romance. I think there’s something achingly real about Georgina’s emotions that readers really connect with. It’s one of the joys of writing a paranormal protagonist that people often don’t realize: non-human characters teach us a lot about what it means to be human.

Q) Having finished the Georgina Kincaid series with the release of Succubus Revealed in September, do you think you’ll miss her character? Do you think there could be a spinoff to the Georgina Kincaid series in the future?
A) It’s not too sad for me because Georgina’s story needed to wrap up. She needed closure. I knew where her series was going and how it would end from the first day I sat down to write her. At the moment, I don’t have any plans to come back to her, but I have a very long writing career ahead of me, and I’m usually only looking ahead a couple years at a time. It’s hard to say what’ll happen in the future!
Q) Do you foresee a time when you will branch into other genres beyond urban fantasy? If so, what genres would you like to explore?
A) It’d be great to try something new, though that’s not always an easy thing when publishers and readers want you to stick to the same genre! It helps that I really love what I write, so this is certainly something I can stay with for a while. If I do branch out, it’ll probably be into sister genres, like fantasy or sci-fi. I don’t see myself doing any westerns anytime soon!

Q) What is your next big career goal / your next step?
A) More of the same! Books and more books. My young adult series is contracted out for the next few years, so that’s definitely on the agenda. Both of my adult series are ending soon, but that just means I’ll have room for a new adult project eventually. I’m not sure what that’ll be, but I can say with certainty I’ll always be writing something.
Posted by David Kentner -- KevaD at 8:17 AM