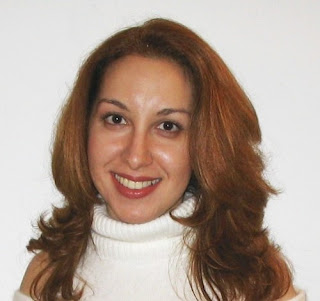 Rosanna Chiofalo captured my full attention without having read a word of her book. What drew me to her was a line in her bio where she credited meeting and falling in love with her future husband to…jury duty. Oh yeah. How could I not want to know more?


Rosanna’s parents emigrated from Sicily in the 1960s. Raised in Queens, NY, with its close-knit neighborhoods and lawn chair discussions of everything, she quickly developed a desire to write stories designed to shatter media promulgated stereotypes. In fact, this desire grew to passion and she obtained a BA in English specifically to pursue a career in writing. Having sharpened her pencils and honed her craft as a copywriter and copy director for several NYC publishing houses, Rosanna embarked on conceiving her first novel.


“Bella Fortuna” is the story of a thirty-year-old Italian-American woman designing and sewing wedding dresses alongside her two sisters in their mother’s New York bridal shop. (How’s that for a series’ nucleus? We can only hope.) Valentina DeLuca has witnessed many marriages, but never her own. Then her childhood crush Michael Carello pops the question and Valentina’s dreams of marriage seem to be coming true, including a fantasy wedding in Venice. Naturally, life isn’t that simple or easy. To reach her happy ever after, Valentina will have to draw upon the strengths and ties that bind of family and friendship, as well as discover her own source of courage and raw determination.


In the skillfully crafted Valentina, the author presents readers with a woman most of us would want for a best friend. Her warmth, vitality, and integrity shine over every bump and obstacle life can throw at her. This is a story sure to pull the reader into the love of family and the sights and senses of romance in Venice.


Fortunately, Rosanna is hard at work on her next novel. 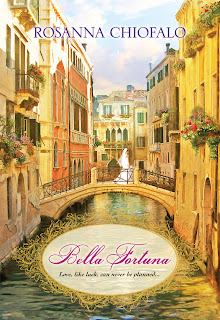 Oh! The jury duty? Rosanna’s future mother-in-law was on that jury too and decided the beautiful young Italian woman would make her son a fine wife. Thank God for meddling mothers.
“Bella Fortuna” will be released August 28th, but is currently available for preorder.
http://www.rosannachiofalo.com/
http://www.Facebook.com/RosannaChiofaloAuthor


Q) For the record – the jury duty story is true? And, will we see it in a book, because you know we readers want to now.


A) Yes, the jury story is absolutely 100% true. I couldn't make that up even if I wanted to! Haven't thought about putting it in a book, but several people have expressed to me that it's the perfect plot to a movie or book so maybe I'll consider it!


Q) Will we enjoy more stories with the bridal shop the center of activity? It’s a great working premise.


Q) Because it is an important element to your characters, what do you believe you have infused in them to break down the walls of stereotype?


A) I believe my characters have a strong moral fiber and are passionate about their relationships, especially where family and friends are concerned. They also have a deep pride and passion for their hard work.


Q) Bless your heart, you included some wonderful recipes in your book and web site. Where did these delightful dishes come from, as I noticed one is called “Grandmother’s Cake”?


A) "Grandmother's Cake" is actually the name for this dessert. Unfortunately, it is not a recipe passed down from one of my grandmothers. "Grandmother's Cake" is a popular dessert in Italy. I discovered it in a cookbook featuring Italian desserts, and when I went to Rome, I also had it in a restaurant there. A few of the other recipes, however, that are in the back of BELLA FORTUNA are from family members. "Fried Meatballs" is my mother's recipe. "Cinnamon Vanilla French Toast" is my husband's recipe; he's a master when it comes to breakfast! And the "Lemon Wedges in Olive Oil and Vinegar" is another Sicilian recipe I got from my mother. 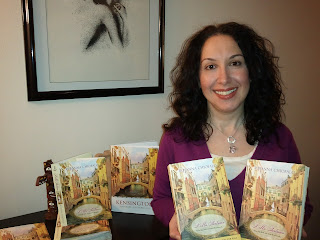 Q) What personal message would you like to send to those about to discover your stories?


A) I hope that readers will connect with the emotions and thoughts of my characters, and I'd like BELLA FORTUNA to make them think more about why the events in our lives happen the way they do. Luck and  fate do have a hand in what transpires in our lives, but we also have the power to take control and alter our destinies.
DA Kentner is an author and journalist www.kevad.net