Before “Rainman,” before TV networks enlightened us with riveting tales of human strength and courage, before autism became a household word finally stripped of our tendency to fear the unknown, autistic children didn’t have a medical or physical condition (autism was a diagnosis in the 50’s but one reason David’s mother did not have him diagnosed is because he would have been institutionalized) They were dysfunctional, or lazy, or stupid, or worse yet – troublemakers requiring a heavy hand to keep them in line, maybe even insane, but they weren’t autistic. And they certainly weren’t geniuses trying to process a world bent on shoving them in to institutions where they couldn’t disrupt our flower garden viewpoint of how life should be.


David Patten survived our failure to understand. Though we locked him away in an experimental facility (they treated him as if he had schizophrenia), he survived. And though dyslexia had joined with his autism to render him functionally illiterate, David found a way to communicate so the world could understand he had something to say.


“Dummy: A Memoir” is a frank and honest look inside the mind of a man who refused to accept the predetermined role society had allocated for him. It is also a mirror of the external struggles we created for him. Teamed with developmental editor Doug Childers, the duo used technology to transfer David’s words to paper for editing, and then from paper back to sound so David could give final approval of each and every fragment of the book. The result is a stirring tale of a human spirit who transformed disability into skills and ultimately found freedom.


Now a husband and father, David resides in Hawaii with his wife. I want to thank Megan McFeely for bringing David’s story to my attention, and for her assistance with this interview.
http://dummyamemoir.com/


Q) Why was telling your story so important to you?


A) I started writing about my life only for myself.  I needed to externalize my experience, put it on paper, so that I could inspect it in great detail. There was a deep disturbance inside and my life was not working well. So I decided to search for the core of that angst though writing hoping I could somehow free myself. I felt a compulsion to write this…it was a very important step in my life. 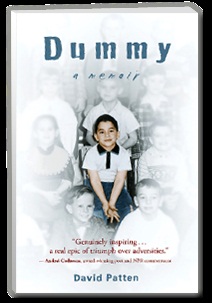 Q) From concept to conclusion, writing your book took seven years. Did you ever consider giving up?


A) My mind was constantly chattering. All these thoughts would run around in my head about who I was, what I had done or not done or how well I had done it. There was constant evaluation and it felt like the only way to stop my mind was with logic. I wrote it all down and followed the internal arguments and criticisms to their ultimate conclusion. With each scenario or experience of my life I would ask it were true? Or if it just was an idea that my mind had? And through this process I found a way to free myself from ideas that I had about who I was or should be.


Writing this book was my life’s focus for a while. It was the only thing that made sense to me.


So even though there were times I wanted to give up. I could not.


Q) Your genius in abstract conceptual mathematics led you to become a successful and sought after technician who debugged computers for corporations and the military. To reach that success there had to be a starting point. How did you convince the doubters of your capabilities?


A) Well I knew I had to get a piece of paper that would be respected by the culture. I got an AA degree because Department of Rehabilitation had a program that enabled me to get my books read and tape-recorded. I was then hired through a verbal interview process and then it was just a matter of job performance. One thing I learned in college that served me well for years, is the logic of trouble-shooting.  I had an innate understanding of how things worked and when I had to “do” or fix something, I excelled.


Q) As an autism-spectrum child now an adult, you have witnessed firsthand the change in society’s viewpoint of autism. Obviously, we have a long way to go. I’m curious as to how you view TV shows like “Touch” and movies that sensationalize autism. Are they beneficial to understanding, or a hindrance?


A) I am not all that familiar with the TV shows, but I imagine they both mislead and clarify. Certainly they make the condition of Autism Spectrum less freighting or foreign to others, which probably leads to acceptance and less isolation for those who are diagnosed. But it is the viewpoints of many so-called experts that I feel are misleading. In my experience they treat autism like it is a disease, but it is not. I believe that most of what we think of autism is a system overwhelm that is caused by reaction to a whole host of biological issues. The triggers, circumstances and symptoms in each person are unique.


Q) Though we’re learning, society in general is unaware autism covers a wide range of levels, not just the extremes. And, while we tend to focus on the child, the stress and difficulties imposed on parents is often overlooked and/or understated. What advice can you offer parents?


A) I think acceptance of the situation is a really important first step. It is not easy, but the more you fight the situation (why me?) the more stress it causes all parties.  I also think that if parents focus their attention on discovering and minimizing what is most overwhelming/stressful in the environment, a more serene setting can be created so that both the parents and child can have some relief.
Q) Any parting comments for potential readers?


A) Do the best you can do…no more, no less and accept your circumstances…


Let your humanity be your guide.
DA Kentner is an award-winning author www.kevad.net