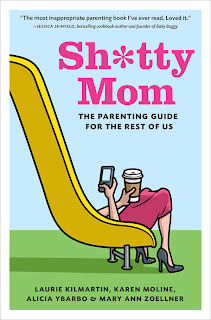 Four ladies decided to write the book on being a sh*tty mom. Literally.


Potential readers may find the title inappropriate, but that’s only because they haven’t opened the jacket to discover our own complicit involvement in providing literary fodder for the creative process. Basically, that means the authors, social peeping Thomasinas that they are, wrote the book “Sh*tty Mom: The Parenting Guide for the Rest of Us” about their observations of everyday parenting, branding our foibles and unexpected child-rearing victories with their unique sense of humor, and are now selling those observations back to us. And, yes, that’s a very good thing.


From the authors’ bios:


Laurie Kilmartin is an Emmy-nominated writer for CONAN on TBS, and, as a stand-up comedian, has appeared on CONAN, Last Comic Standing, Jimmy Kimmel Live, and Comedy Central. She lives in Los Angeles with her son.


Karen Moline is a journalist and author who has written more than two dozen nonfiction books, as well as two novels. Karen and her son live in New York City.


Alicia Ybarbo is a four-time Emmy award–winning producer. She has worked on NBC’s TODAY show since 2000. She lives in New York City with her husband and two children.


Mary Ann Zoellner is a three-time Emmy award–winning producer whom has worked at NBC news for 16 years. She lives in New York City with her husband and two daughters.


With topical topics such as ‘Your Children Want to Ruin You,’ ‘It’s Come to Your Attention That Your Kid Is Merely Average,’ ‘Yes, the Babysitter Is Judging You,’ ‘How to Get Rid of a Mom Who Wants to Stay Over During the Entire Playdate,’ ‘How to Drop Off Your Sick Kid at Daycare Before the Teacher Figures It Out,’ and, ‘He Wants Sex; You Want to Sew Your Legs Shut for Ten Years,’ there truly is an acceptable psychosis for each of us.


This book is funny. So, here’s the warning label: Do not read while taste testing a latte’s temperature with an infant on your lap. Do read during a PTA meeting when Mrs. Perfect is extolling her child’s impact on the education system so you have something to blame your hyena laugh on. Do not read at your mother-in-law’s. No matter how you try to explain it, she’ll know you were laughing at her. Again.
http://shttymom.com/


“Hello, this is Laurie, I'm gonna respond for all of us if that's ok.”


Q) How did the four of you not just decide to write together, but to write this book?


A) MaryAnn, Alicia and Karen came up with the premise, Sh*tty Mom. They wanted a parenting book that was funny and also a response to what seems like one new book a month that terrifies moms into thinking they are doing everything wrong. As a standup, that's exactly how I treat motherhood onstage, so right away, we were on the same page.


Q) The obvious question; How were the individual topics selected for full frontal assault?


A) I just took an inventory of my life and notice that I hid a lot of my parenting tricks from people, because they sounded wrong. Anytime I felt like, "I hope no one finds out I do this," I turned it into a chapter.


That's basically what the book is. So, yes, I do leave my son's breakfast out the night before so I can sleep in on Saturdays. Yes, I have no idea if he was a good sleeper as an infant because as soon as I'd put him down, I'd drown out any noise with an industrial-strength fan. Yes, I barricaded him in his room once so I could get through a conference call without anyone knowing I was working from home with a sick toddler. And I still carry the shame of being yelled at by a naked woman for bringing my 4 year old son into the women's room at the Hollywood YMCA.


Q) I'm feeling obvious. Any plans for another joint venture?


A) We all have kids to put through college, we'll do anything.


Q) The four of you are professionals, each carving your own deserved place in the entertainment industry. Briefly, please describe the give and take process required to pen this book without the use of scorpions hidden in napkins and jalapeno laced sour cream.


A) Before we sold the idea, Mary Ann, Alicia and Karen had some thoughts, and I ran with them. After we sold the book, I sequestered myself in Los Angeles and cranked it out in about 5 months. At least half of Sh*tty Mom was written on weekends, at a McDonalds in Burbank, while my kid was in the Play Place.  (At this point, there's nothing I can't tune out.) Since we four are of like mind, they left me alone to put it all together. It helped that we were on different coasts. None of the three New Yorkers wanted to talk to me at 11 PM Eastern, and I was too bitchy to converse with at 6 AM Pacific.


Q) While this question is cliché, the emotions involved never are. Humor aside, what is the one attribute you possess that you hope to pass on to your own children?


A) Just looking at the world economy, I think we all hope our kids grow into adults who are able to forage for food and sew their own clothes.


A) You're a better mom than you think you are, and your neighbor is worse.
DA Kentner is an author and journalist www.kevad.net
Posted by David Kentner -- KevaD at 12:00 PM