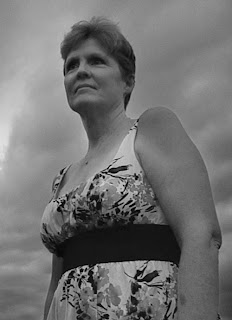 Regency Historical fans may already be familiar with the very talented author Deborah Raleigh – also known as Alexandra Ivy – and her nearly forty published books. In fact, Alexandra Ivy’s “Immortal Rogues” series was originally released under Deborah’s name. However, we readers being who we are and known for our loyalty to specific genres and the authors in those genres, the decision was made for Alexandra Ivy and her fascination with dark, dangerous paranormal heroes to step into the limelight. And what a step it’s been.


Melding the traditional dark side of vampires and shape shifters with heart thumping romantic suspense, Alexandra’s novels quickly garnered readers’ attention, propelling Alexandra to the bestseller lists. Still, the author’s interest in heroes frequently darting back and forth between chivalry and less than honorable intent isn’t new. In “The Merry Cupids,” part of the “Valentine Rogues” anthology, readers were introduced to the questionable reputation of Mr. Guy Ravendell. Similar characters made appearances in other anthologies such as “One Night with A Rogue” until Alexandra surrendered to a shadow demanding his story be told. The result was “My Lord Vampire,” a regency romance invaded by the commanding presence of vampire Gideon Ravel. It turned out that Gideon had a lot of friends waiting in the darkness. The “Guardians of Eternity” series was born.


Book 1, “When Darkness Comes,” established what would become an honor roll of seductively dangerous paranormal men sworn to risk their souls in the protection of women standing their ground between good and evil. “Fear the Darkness,” the ninth offering, holds true to its predecessors’ intrigue, romance, and edgy plots. Cassie is a rare and delicate werewolf that threatens the darkness. Caine is a Were in need of redemption. The attraction is smoldering and rife with danger, both from each other, and an evil chaos threatening the world. 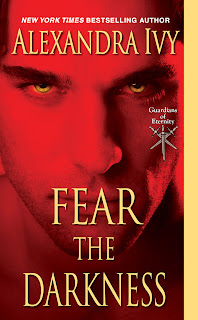 Grab a copy of “Fear the Darkness,” hold onto your seats, and make sure there’s plenty of ice in the freezer. The summer’s about to get even hotter. I should mention that for those who enjoy a little humor in their paranormal, the anthology “The Real Werewives of Vampire County” came out last November.
http://www.alexandraivy.com/


Q) You’re married with two sons. How do your boys feel about Mom and her dark, romantic heroes?


A) They’ve always been very supportive of my writing career despite getting teased by their friends.  It’s not every teenager who goes to a party and has to listen to the love scenes his mother wrote being read out loud J  Thankfully, now that they’re older, they can appreciate the humor of having a mom who writes about sexy vampires.  They even enjoy telling people about my career.


Q) While most regency fans relish a good rogue, the crossover to paranormal could have been risky for you. Why did you decide to make the leap?


A) I fell in love with “Buffy the Vampire Slayer.”   It was such a unique blend of horror and romance and humor.   And of course, the characters were fascinating.  Suddenly a heroine didn’t have to be rescued by her hero.  She could save the world and still be a vulnerable female.   And the heroes (Angel and Spike) were as intensely alluring as any wonderful hero should be, but they were also complex characters with obvious flaws.


I wanted to create my own world where a clan of vampires was entrusted with protecting the humans against the creatures of darkness.


Q) A Missourian with a degree in Speech Communication, educator, golfer, wife and mother, you also enjoy traveling. How have your European journeys influenced your writing?


A) When I was writing historicals, nothing could replace actually visiting the locations of my stories.  A photograph or travel book can give details of a place, but a writer needs to see how the sun shimmers off a stained glass window, or smell the smoke from a peat fire.  I write contemporaries now, but most of my characters come from other countries and other times.  It’s been a great benefit to not only have researched the past, but to have walked the same streets as my vampires.

Q) You once stated that your paranormal stories contain more danger than the regencies. Why hold back in either genre?


A) My regency readers preferred the unfolding romance to be the center of the story.  That meant the plot had to be woven around the relationship rather than the adventure being the driving force of the book.  And by tradition regencies were “sweeter” than other romance stories.   The atmosphere was light and fun. Paranormals tend to be edgier, bloodier, and sexier.


Q) You opted to carry the paranormal stories into contemporary instead of leaving them in historical. What was behind that decision and do you have any plans to meld them in the future?


A) When the idea for the Guardians began to form I could vividly see them in modern day Chicago.   They were powerful and sexy and barely civilized.  I wanted the contrast of their savage natures in a time that’s considered “civilized”.   But one of the perks of writing immortal creatures is that I can set them in past when it fits the story.  I actually took one of the characters from my Immortal Rogue series that is set in Regency England, and put her in my current books.  It was exciting, as well as challenging, to take her from the past and weave her into my Guardian series.  She had tremendous vampire power in the past, but she truly came into her own as a woman in the newest story.


Q) Any parting thoughts for your fans and new readers? 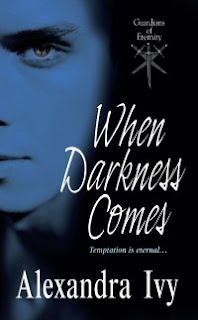 A) I want to thank all of my readers!  They’ve been so incredibly supportive, not only reading the books, but sharing word of the stories to their friends.  Their loyalty has given me the encouragement to continue to expand my world.  Without them the Guardians of Eternity wouldn’t exist!


I also wanted to mention I would be starting a new series in 2013 that will be called the Sentinels.  It’s separate from my Guardians, but it’s still a paranormal with humans who are born with ‘special’ powers and the warriors who protect them.  I hope my readers will enjoy them!!
DA Kentner is an author and journalist www.kevad.net
Posted by David Kentner -- KevaD at 9:07 AM