Since her first published work, a short story for Ellery Queen’s Mystery Magazine’s Department of First Stories, Leslie has been writing mysteries and now has sixteen Lucy Stone novels to her credit. The heroine Lucy is a newspaper reporter and harried mother for four in fictional Tinker's Cove, Maine, the kind of charming town where nothing out of the ordinary should ever happen, but always does. In real life, Leslie was a newspaper reporter also. The result, in addition to some marvelously entertaining stories, is an insider's look at the hectic world of the reporter from the perspective of a wife and mother who lived it.

Leslie doesn't follow the traditional gunshots in the dark type of murders; hers encompass manufactured asthma attacks, asphyxiation, and mysterious ailments. And of course, what St. Paddy's Day celebration would be complete without green beer and a beheading?

"English Tea Murder" is the first story that follows reporter Lucy out of the U.S. to jolly old England, and lands her smack in the middle of not just one, but two murders, and more to come if she can't track down the killers while searching for the elusive perfect cup of tea.

Leslie Meier's books are as strong and humorous as her heroine, and as skillfully plotted as her murders. Finish one, and as her many fans attest to, the reader will keep coming back for more.
Leslie's Web Site
Q) What inspired naming the books in respect to particular days?

A) When I began writing I knew very little about the business, but I had heard that most books are sold at Christmas so I made my first effort, "Mistletoe Murder" (originally titled "Mail-Order Murder"), a Christmas book. Readers suggested I write a Halloween book, so I wrote "Trick or Treat Murder" and after that I began looking for other holidays to write about. Some of my favorites, however, feature family events such as "Birthday Party Murder" and "Wedding Day Murder." Families offer so much material!

Q) Wiccan enthusiasts have repeatedly praised your attention to detail in "Wicked Witch Murder." How much and what kind of research did you do in order to be so accurate in your accounts of witchcraft? 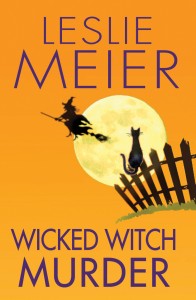 A) No, I didn't attend any Black Sabbaths! One of the advantages of being able to write full-time is that I do have time for research, which I really enjoy. I got the idea for "Wicked Witch Murder" from a friend, who mentioned her sister-in-law was a witch-in-training. I was immediately intrigued and asked if I could talk to her but got a very firm rejection -- apparently witchcraft was not to be taken lightly!

So I went on the web and found tons of fascinating material. I also went to the library and took out every book they had. I even dug out my college copy of Frazer's "The Golden Bough." One day I noticed "The Wicker Man" -- the original 1960s version -- listed with the free movies on CATV and spent an enjoyable afternoon watching it. The toughest thing about research, I find, is stopping and getting to work on the book!

Q) Of all the genres to write in, you chose murder mysteries. Why?

A) I guess because they're the kind of books I most enjoy reading. I always have, starting with Nancy Drew books when I was a kid.

Q) As a writer, you have enjoyed the luxury of aging with your heroine, Lucy. Now, as I understand it, Lucy has reached the point where she can't age anymore and maintain the current storylines. How difficult will it be to put that separation between you, or are you contemplating a new character and a new series.

A) That's the wonderful thing about fiction -- Lucy can remain middle aged while I dodder on, growing increasingly frail and feeble.

Q) How do you, a wife, mother, and grandmother, keep coming up with all these unique ways of killing people.

A) Well, I don't know anything at all about guns so I pretty much have to think of other ways of murdering people. I don't really kill them, you know, it's all fiction. But sometimes I do base a character on someone who has really annoyed me and I think it's a very healthy way to work out one's aggressive tendencies. I'm very careful to change any identifying characteristics before the book goes to press, however. 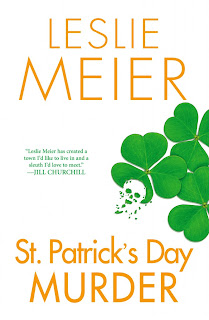 Q) Any parting words for your fans and readers?

A) Thank you, thank you, thank you! It's wonderful to know that people enjoy my books, and that sometimes my books have even helped people get through difficult times. Now it's easier than ever to get them because most are available as ebooks. I'm venturing into social media, I have a webpage and I'm on facebook and I plan to develop more of a presence in the future. In the meantime, the books keep coming: "Chocolate Covered Murder" will be available in time for Valentine's Day 2012 and I'm hard at work on "Easter Bunny Murder" in which, much to my shame, I kill the Easter Bunny. (No, Virginia, not the real one, just a man in a bunny suit.)
Posted by David Kentner -- KevaD at 8:33 AM