Dr. Yvonne Thornton: First American woman to be accepted into the OB/GYN residency program at The Roosevelt Hospital in New York City, first black woman in the U.S. to be Board-certified in High-Risk obstetrics and to be accepted into The New York Obstetrical Society, established and developed the program for a new form of early prenatal diagnostic testing known as CVS (chorionic villus sampling), outspoken advocate on women's health issues, spokesperson for The March of Dimes, hosted her own television show on women's health, Pulitzer Prize nominee and bestselling author, wife and oh, so proud mother.

Obviously, such a gifted and successful woman had to have been born into a family and circumstances that afforded such opportunities. Dear reader, if you believe that, you are so very wrong... and so very right.

Dr. Thornton and her five sisters are the daughters of father, Donald, and mother, Itasker, whose wealth was the love and determination to succeed they bestowed upon their children. Donald Thornton was a ditchdigger who worked two full-time jobs to put food on the table. Donald's guidance and creed of "Don't let anyone define who you are" instilled the sisters with the understanding that intelligent and educated are not synonyms. And, that by combining intelligence, drive, and courage, any goal is attainable.

Dr. Thornton stands today as the ultimate example of that philosophy. 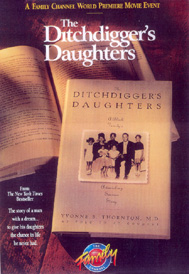 In the heart wrenching and inspiring novel "The Ditchdigger's Daughters," Dr. Thornton shares her upbringing and the family values that gave her the strength and faith to venture into a world with many doors closed to women, and especially black women.

"Something to Prove: A Daughter's Journey to Fulfill a Father's Legacy" is Dr. Thornton's personal story of how, armed with her father's teachings, she ascended to the top of her field despite setbacks, bias, and a white male-dominated field.

As a result of Dr. Thornton's continuing dedication to helping women "INSIDE INFORMATION FOR WOMEN: Answers to the Mysteries of the Female Body and Her Health" was released this year.
http://www.doctorthornton.com/

Q) A question from my wife: Why did you choose to pursue a career specializing in obstetrics and gynecology?

A) The answer is in my first memoir, The Ditchdigger's Daughters ("The Thornettes"). I didn't choose obstetrics, I think it chose me. At the age of eight years of age, I was witness to a precipitous delivery in an elevator.

Q) You and your husband, though so busy with your distinguished medical careers, both volunteered to serve active duty in the U.S. Navy. Why? 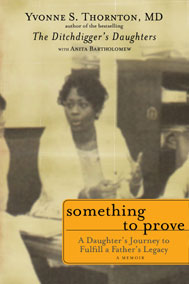 A) That answer is also in my first memoir ("Navy Blue and Black"). However, it was my husband's fervent belief that, as Americans, we should all give back in service to our country.

Q) Excluding family, what would you consider your crowning achievement; the one accomplishment you feel defines your character?

A) I can't exclude my family because they are the essence of my being and my children are my most valued accomplishment. My husband is my champion. After that, being the first black woman in the United States to be Board-certified in High-Risk Obstetrics is my highest professional accomplishment.

Q) I've heard a rumor about a T-bird and its role in some college shenanigans. Care to share a story or two?

A) If you define "shenanigans" as commuting back and forth home from Monmouth College (West Long Branch to Long Branch) in my fabulous 1965 Thunderbird convertible with sequential turning signals, well that was about it.

Q) Your father said, "If you look back and think you did a whole lot then, you're not doin' a damn thing now." So, what's next for Dr. Yvonne Thornton? 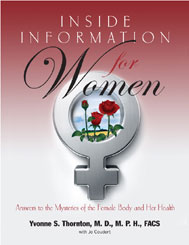 A) He is absolutely right!! My plans are to continue my parents' legacy by supporting and encouraging my children to leap and go as high as their talents will allow. As for me, my hope is that the book (The Ditchdigger's Daughters) will be adapted into a Broadway musical (from the page to the stage)!
Posted by David Kentner -- KevaD at 9:22 AM