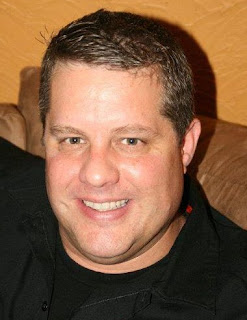 
KB isn’t shy about what genres he’s willing to explore. “The Darker Side of Heaven” is a paranormal tale about the clash of light and dark, the reuniting of former lovers (a vampire and an unworldly woman warrior), and a mysterious force behind the scenes. “Undead Reflections” is a short story surrounding a woman filled with a mistrust of life and a nearly uncontrollable need to find love before the zombie horde surrounding the diner she’s trapped in fill their bellies. “Killing Apathy” is the author’s twist of a serial killer with a unique perspective of life in suburbia.


However, it is KB’s collaboration with Margie Church that has produced a story being talked about in many circles. “Razor” follows the desire of a married couple to reconnect in the bedroom. The bondage, domination, and submission play may have started as fun, but husband Bryce is taking his domination role a little too far, and wife Amy has had enough. But Amy doesn’t want to lose her marriage. So, she reaches out for help. Her solution is to bring in a female dominant named Raine to tame Bryce and his growing needs for exploration. And this is where KB and Margie’s partnership excels. The authors took what could have been a trite sexual fantasy and created a psychological tale of questionable motives, mental sparring, and an atmosphere of erotic suspense that keeps the reader on (pardon the pun) a razor’s edge of anticipation with love the ultimate prize.


What’s next for the New York cop known as KB Cutter? We’ll have to impatiently wait and see.
http://www.kbcutter.com/ 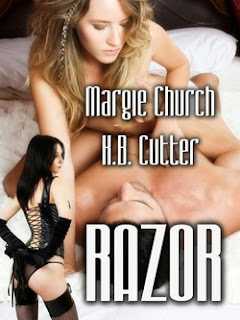 Q) What prompted you to write romance?


A) Strange happenstance, for it never crossed my mind I would some day write almost exclusively in this genre, until I began to participate in an online creative writing group a few years ago. Most of my writing partners were female, so each story contained an element of romance, no matter what the plot or setting. Eventually, I figured I might have a modicum of talent and felt comfortable enough to submit a story to a publisher.  I was fortunate enough to have my submission accepted and a few days later, I was signing a contract with Noble Romance.


Q) Obviously, your co-workers aren’t aware of your writing. Are you prepared for the day they catch on?


A) I recently let the gremlin out of the bag when I spied a paperback copy of Fifty shades of Grey in a female co-worker's gym bag. I made mention I dabbled in romance fiction and directed her to my author web page. I have not heard a peep since. Good or bad, I can't say, however, sometimes there is the quiet before the storm, so yes, I'm girding myself for the potential lambasting.


The job can be like going to middle school-except with mace and night sticks.


Q) How did your collaboration with Margie Church come about?


A) Margie and I became fast friends, so I think an eventual collaboration on a writing project was inevitable.  Margie conjured up this fascinating psycho-sexual tale about a dominant male who meets his match with an equally dominant woman. We had an exchange of emails, each taking part in crafting the next scene and we immediately knew it begged to be shown to a wider audience. Through her contacts, Razor began a short story in a BDSM themed anthology produced by Sizzler Publications. The publisher wanted us to work Razor into a full-length stand-alone novel. Encouraged by the positive reader response to Razor, Sizzler Publications has asked us to make Razor into a trilogy. Margie and I are currently working on book two- Razor: Love's Storm.


Yeah, Margie Church is riding my coattails, but I can't blame her one bit. When you're a shooting star . . . the faster they burn out!  All kidding aside, I'm exceedingly grateful to count Margie as a mentor and true friend. Q) You’re married. How did your wife take to the decision to write a story as sexually complex as “Razor”?


A) She was on board as long as I found the real life counterpart to Bryce and bring him home so she could assist in reenactments of key scenes. She told it me it’s crucial 'visual creative research.'  I'm not sure what that means, but I'm grateful for her support.


Q) Have you considered writing a suspense/thriller like we readers tend to expect from authors with law enforcement experience?


A) I have. I often day dreamed of being the next Wambaugh or following in the footsteps of Ed McBain. It's a tough, crowded market.  I may go retro and take a page from Mickey Spillaine's body of work and combine the fists and .45 of Mike Hammer's hard-boiled detective persona and work that concept into a uniquely K.B. Cutter romantic thriller. 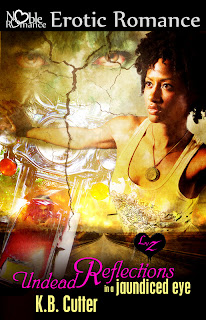 Q) Any parting comments for fans and those yet to read your work?


A) For those who have yet to view my work, please do. You may be pleasantly surprised or disturbed, either way, it stay with you, because I do so enjoy bucking convention.


For my fans, thank you. Without you, dear readers, there would be no joy in my words.
DA Kentner is the author of the award-winning novel Whistle Pass  http://whistlepass.blogspot.com/