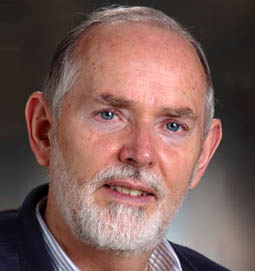 Concerns surround the educational evolution of today's learning institutions. It is a topic widely discussed both publicly and privately.

Dr. Kieran Egan has proposed a solution for raising the quality of learning within our schools – completely rebuilding the education system.

Dr. Egan has been spreading his message of the need for improvement in our children's learning behavior for decades, but it was the release of his book "The Future of Education: Reimagining Our Schools from the Ground Up" which caught the attention of the general public. "Learning in Depth: A Simple Innovation That Can Transform Schooling" is scheduled for release March 15th and has already stirred much debate and controversy.

"Imagine a future in which it would be routine for schools to randomly assign 1st graders one topic to study through grade 12, along with the regular curriculum. Students would learn about birds, apples, the circus, railways, the solar system, and so on… Each student, by the end of his or her schooling, would know as much about that topic as almost anyone on earth."

While educators and parents react to and debate Dr. Egan's philosophy, what no one can deny is Dr. Egan's heartfelt concern for the educational needs of future generations. www.educ.sfu.ca/kegan/

Q) There are those who decry your work as individualization, the antithesis of perspective. How do you respond to those who believe your concept would tunnel the vision of students? 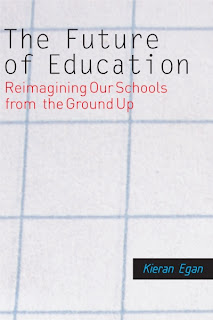 A) Well that might make sense as a criticism if the students did ONLY the "learning in depth" (LiD) project and stopped being involved in the rest of the curriculum. But LiD is designed as a small add-on to the regular curriculum, in which students might meet with their teachers for an hour a week or less. Much of the work would be done outside of school, like a hobby. I introduced the idea to some students in 2008. Two of the students, who were also teachers, decided to give it a try in their own classes. So in 2008/9 school year there were about 30 students working on portfolios on their topics. In 2009/10, there were more than 2,000 students involved, and this year there are many more, not only in the US and Canada, but in Greece, Romania, Australia, Iran, Japan, England, and other countries.
I confess I am puzzled by the notion that learning a lot about something like apples or beetles or railways or birds will somehow damage students' minds and make them "narrow." Humans like to learn, but the institution of the school is not always hugely successful in harnessing this engagement with knowledge. The LiD project is one of the few things students do in schools that is not coerced. It is entirely voluntary and students can stop at any time, and there are no tests. So far, I am not aware of any student dropping out or wanting to change their topic. In fact, for very many students, their LiD study is one of their favorite school activities.

Q) How much, if any, did the philosophies of Eastern European education influence your work?

A) I suppose this depends on whether you are classifying Vygotsky as eastern European. If so, then yes, I have found Vygotsky's work stimulating in a number of ways. But I confess to much ignorance about other eastern European philosophies.

Q) No one can work 24 hours a day. What relaxes you when you step out from the halls of Simon Fraser University?

A) I like to kayak, I have built a couple of Japanese gardens (see www.educ.sfu.ca/kegan/Japangardenhome.html --where you can read, and see pictures of, the slightly crazy construction of a Japanese-style garden and "tea-house" at the back of our yard. Originally called "Building a Japanese garden--the Irish way," the eventual publisher of the book, Houghton Mifflin, changed it to the--I thought--uninteresting "Building my Zen garden." I also enjoy traveling to exotic places giving talks: Tbilisi, Cluj, Sao Paulo, Kyoto, Tønsberg, Falun, Pittsburg, etc.

Q) You are a dynamic and energetic speaker. In fact, one commenter compared you to a Monty Python performance. Who instilled such enthusiasm in you?

A) Well, that may be an overly kind observation. I think we come with a package of dispositions that either get supported by early interactions with the world, or they get discouraged, deformed, frustrated, whatever. I like Philip Larkin's response to a similar self-addressed question about basic characteristics: "They're more a style/ Our lives bring with them: habit for a while/ Suddenly they harden into all we've got/And how we got it." Elsewhere he is even more eloquent in response to a similar basic question, and this encapsulates my answer better: "Beats me."

Q) Without significant change, where do you believe North American education will rank in the world in twenty years?

A) In a companion book to the "The Future of Education," called "Getting it Wrong from the Beginning" (also published by Yale University Press), I argued that current US thinking about education remains imprisoned by 19th. century beliefs, influentially articulated by Herbert Spencer. If American educationalists continue to believe that the dominant forms of educational research will yield them knowledge about how to educate better we will continue a gradual decline into increasing ignorance, triviality, and lack of understanding of both our cultural heritage and the complexity of modern forms of life. But I don't think North American education is unique in the kinds of defects I try to point out in the two books mentioned above, so in a comparative sense we may not seem to slip much further down some league table. But we will have a hard time, and will likely have to import expertise, to sustain our technological culture and economy--we are not producing enough sufficiently skilled, competent, and knowledgeable people. This failure might bother people in terms of our economic future, in competition, say, with China and India, but it ought to worry us more about being able to sustain democracy and civility. Ignorance has never been the best guarantor of freedom and democracy. 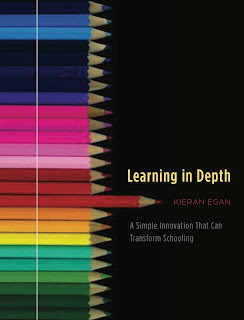 Most of my work, and that of my colleagues in the Imaginative Education Research Group (IERG) http://www.ierg.net/ is concerned with showing how we can engage students' emotions and imaginations in learning the contents of the curriculum. The current obsessions in North American education with pseudo-scientific educational research and stretching implications from that to practice, and then testing students on shallow performance of simplistic tests can only make trying to show that everything in the curriculum is full of wonder a really tough struggle.
Posted by David Kentner -- KevaD at 6:35 AM